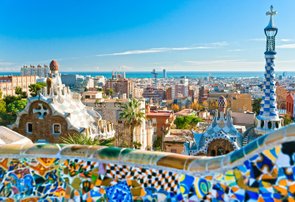 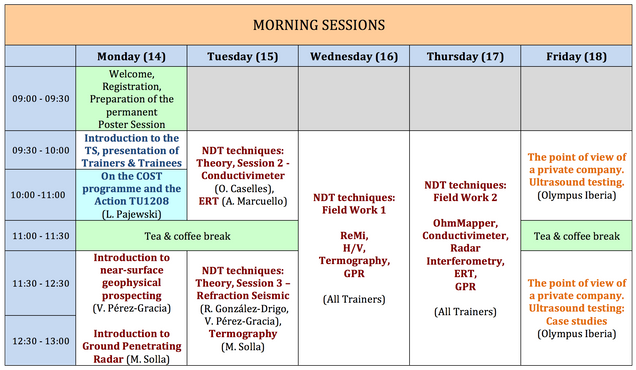 Two full days were devoted to practical training. In the morning, surveys were carried out in  the main campus of the University (Campus Nord) by using all the above-mentioned techniques except the last three. In the afternoon, the collected data were processed and interpreted in the Laboratory where Trainees had at their disposal several computers, with  processing software installed on them.

On Friday, half-day was devoted to ultrasound testing:  the Spanish company Olympus  Iberia delivered a course including a theoretical session, a practical demonstration and a presentation of case studies.

We deem that it is important to always provide Trainees with the point of view of both the academic world and private companies. Therefore, the course included another lecture given by the Spanish company Geotopsa: they  presented interesting case studies  where GPR and other NDT techniques:   were jointly used.

Successful interaction with COST Actions TU1402 "Quantifying the value of structural health monitoring" and TU1406 "Quality specifications for roadway bridges, standardization at a European level (BridgeSpec)" took place: indeed, the activities carried out by these two Actions were presented and discussed during a dedicated lecture given by Prof Joan R Casas (TU1406 MC Vice-Chair and TU1402 WG Leader).

A permanent Poster Session was held: Trainees brought their posters to the Training School, to present and discuss their research and professional activities involving GPR and other NDT techniques. 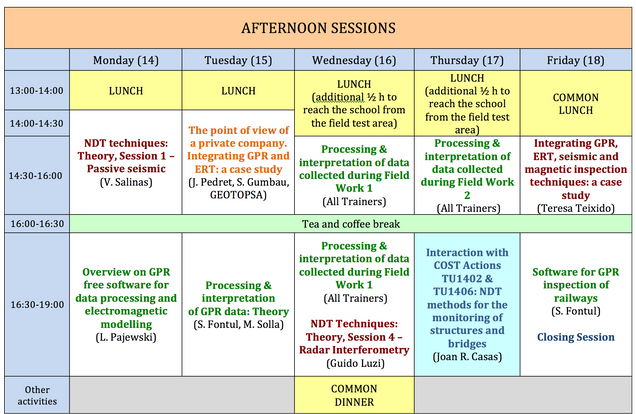 The COST Action TU1208 is proud to offer free courses: this school did not have a registration fee and students from all Countries were very welcome to  attend it for free.

To submit a Grant application, the following items had to be sent to school@gpradar.eu:

The application were examined by the Training School Coordinators. The selection of Granted applications was based on the COST key principles of excellence and inclusiveness. COST is supported by the EU Framework Programme Horizon 2020 and its policy contributes to the "Spreading Excellence and Widening Participation" Horizon 2020 goal. To identify excellent applicants, we ask applicants to submit a curriculum vitae, a motivation letter and a support letter. At the same time, we aim at achieving inclusiveness. This objective is around three main elements: we support Early-Career Investigators, foster  gender balance and support researchers coming from less-research intensive COST Member Countries.